– SHACK THOUGHTS –
The first of a two-night stand w/ the Greyboy Allstars at The Fillmore, this show is packed with energy and a funky feel overall — not too much straying from the groove in this gig, but man do they slam that groove around!

This is the MMW debut of Fuck You Guys, which John debuted with The Itch in the summer of ’06. Cool to hear the band revisit Friday the 13th by Thelonious Monk — LOVE hearing John playing Monk! — wonder what brought that on? Track had sounded familiar for years and in my last round of sharing this show a guy identified the Monk tune; the last (and I believe only?) time the band played that tune was during the Improvisation HEAVY Tonic run during August 2002 — it was one of a few actual tunes played over the three nights (Hmmm, think I just got my idea for this week’s FAITU pick!). Exploration w/ Karl Denson is pretty sweet as well and builds to an incredible groove, and the following Bass’n’Sax > Bemsha/Lively is certainly a must hear … this is a super fun show … 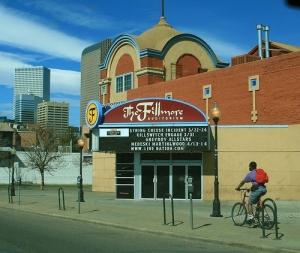