For this 2nd instance of FAITU we jump ahead from the previous week by 11 years to find ourselves in the summer of 2004 where MMW played a mix of festival gigs, openers for The Roots, as well as some of their own shows. This week’s selection is a 2 set affair from Colorado in early August …

2004 was a golden year of improvisation for MMW. End Of The World Party (Just In Case) would be released in the fall, and the guys had started playing some of those tunes as early as fall ’03, with winter ’04 finding even more new tunes popping up. We’ll get some of those new tunes in the 2nd set of this show, along with some old favourites, but the first set will be almost entirely new to everyone, aside from the last tune, and it will happen only once: We’re looking at about 45min of pure spontaneous composition, and the band is *on*! 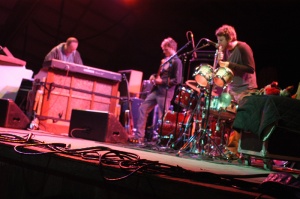 Starting with the first set:

Track#2, first Improv, starts with the band exploring the fringes of space before Chris plunks some key notes just around 1.5min in and suddenly a whole tune begins to develop, slow groove-like. At 3min we hit a set of very affirmative chords from John and things are sounding celebratory in a low-key way for a bit before some nasty sounding keys urge Billy into a little more chaos, while Chris continues with the sluggish bassline he’s created. John is toying around, settles into the Clavinet and we’re off into a sluggy funk with a bit of a Night Marchers-ish vibe — oh yeah, I’m liking this! Change up into an organ interjection, busy fills from Billy, and Chris keeps milking that bassline to great effect. illyB kicks it up a notch just before 6min and really starts wailing and finishing out that groove, while John and Chris follow him into some outer-space for the last couple of minutes on track #2.

Chris and Billy lock into a quick paced bottom for track #3 and John jumps into the fray bubbling over top. Organ jabs just after a minute in while Chris and Billy continue developing the bottom end — suddenly we’re into yet another killer spontaneous composition! Where do these melodies and beats all come from!?!? John’s working both the Clav and organ now as both Chris and Billy bust their parts open more and start filling in the sound. We hit a “bridge” in the tune around 3.5min, then John and Chris bring us back around to the groove we’d started with — this is cool shit! After milking this for a bit longer they start bending the structure they’d established while still echoing back to it, pushing us further on with John on organ and Chris on stand-up — this feels kind of like LCTDT(P) — until the eruption of an illyB solo! It’s short and more of just a connector joining to the next groove than a full on Billy solo, in the usual sense (if MMW can be said to have a “usual”). Chris is the first to jump back in with Billy, with John not too far behind, and this is subtly building layers onto Billy’s beat, which he keeps breaking into with percussive colouring or some off-beat fills — this piece carries onto the next track …

… John slides onto the Rhodes(?) and really takes control of this groove’s direction, and all three are locked in. Eventually the tempo really picks up and they spend about 2min breaking this down … slowly … @6:17 a new groove begins out of the remnants of the noise left by the previous, beginning with almost a Combustication-like sound before John backs off a bit, and Chris steps in with a quick pulse and Billy’s tinkering leads to him riding the cowbell. As this progresses we head into similar territory as the tune We Are Rolling — structure-wise — and it is ROCKING! Billy is just pounding his kit, John’s going crazy, and Chris is holding down the groove.

The pick up at the end of the last track leads into this next Improvisation, and Chris is the one pushing the other two.

This last Improv sounds similar in spirit to If I Only Knew — the melody sounds recognizable, but sometimes I’ve listened to some of these improvisations so many times that it’s hard to distinguish *why* something sounds familiar. And it almost sounds like Chris is tinkering with the Queen Bee bassline way back here, 3min before the tune bubbles up to close the set — love the slinky groove of Queen Bee! (I keep thinking of my wife dancing to the tune when we first got the EOTWPjic album – HA!)

And then the second set:

I could listen to Toy Dancing at EVERY show — I love that swirling call from John! Love the different sections of this tune and band ride this one right into some open space before Billy and Chris buckle down together for a bit leading us in to the sassy Sasa, a new-ish tune at the time, with Billy on tambourine (he rocks the TAM!) and Chris plunks along the melody … Sasa holds inside the tune’s groove before leading us to ITAHTLMJ, a welcome tune any time as well (one of the earliest MMW tunes I remember hearing). Sasa slows right down, Billy keeps just the beat going, and suddenly we’re romping along for Jesus … a nice solid take on the tune — hard to hear a bad version, really, but this has some nice playfulness belonging to a “2004” take on the tune (i.e. John’s sounds).

Curtis, another new EOTWP tune, is always pumping and this one jumps right in full steam off the last beat of ITAHTLMJ driving ahead to explode into some welcome release on the drums by illyB, which gradually speeds us into some …

Fire! By Hendrix, that is — I love MMW’s take on Hendrix tunes because they bite right into them … and where there’s Fire, there’s Smoke. I always dig the combo of the two tunes, and Smoke brings us back in nicely from the Fire chaos.

Once the Smoke clears, Billy solicits the audience for a song, baffled by the choice, but obliging the fans nonetheless: Chubb Sub! And this ain’t your standard Chubb … a LENGTHY solo from Chris gets us to the start of Chubb, but the beginning saunters in with Medeski jumping in on some different sounds than usual — ya gotta hear it!

Ending your evening with Whiney Bitches might not *sound* appealing based on the title, but that groove is so FREAKIN’ awesome! Fantastic encore to end a KILLER gig … just one of several from 2004.