– SHACK THOUGHTS — SHACK PARTIES I-VII ’96 –
Listen to these gigs. Listen to all of these gigs — it’s the best advice I can give you. These Shack Parties, where the band played for 7 Mondays in a row at the Knitting Factory in NYC, encompass such a wide range of the band’s talents and musical interests that a summation would simply do the music an injustice. Whether you dig a certain track or guest through this run, you have to admit that each guest brings something unique to the mix which in turn causes the band to react and shift, making the music they all create something adventuresome and real for that moment only. There are also plenty of moments where it’s just the trio and you’ll love it. As they explore both groove and open space with/out guests, it is clear this is a band out to make inspired music. 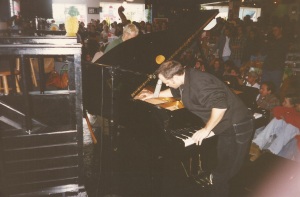 What can I say? Been blabbing for weeks about these shows, and this last Shack Party is no exception. The gig is lousy with incredible improvisation, guest input that fits so well (Tablas?!; Dirac and Blume on guitar?; Hipp sax?), and a straight-up bluesy encore by the trio alone … a tune some of you might know as Slow Blues For Fuzy’s Mama, but is originally titled Can’t Get What You Want … hope you got what you needed on this last Shack Party pick for Friday Afternoon In The Universe … onto some other gigs for next week’s FAITU pick!