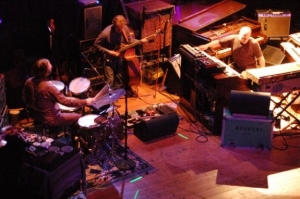 Big thanks again to Jeff Kennedy for taping and sharing the recordings with me to then share with all of you! THANKS, JEFF!

Maybe I’m biased, but I think this is my favourite pull … by a small margin … anyway, check this source out … and if you haven’t heard this show through one of the other sources, then download this and LISTEN! 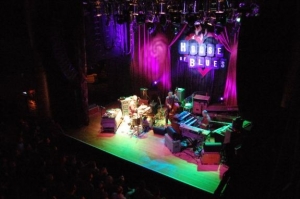 Set II is once again incredible … the Layla Improv is beautiful and leads into a pumping jam … the section with Cornelius Boots is just really great — I kinda wish he’d been alone with the trio more … and Moe Jackson drives the bus? WTF? This is like back in ’05 when Dominic Placo (their driver at the time), came out and blew the trumpet with them … why are these guys just driving people around! HA! THEY ROCK! Hopefully they get to play more than just occasionally …

I kinda feel like that last Bus Driver Improv is familiar — like I wanted to start singing along with it when it got going, but couldn’t think of the words … but, I guess it’s probably just another kick ass improvisation …

Man, this was an INCREDIBLE tour! 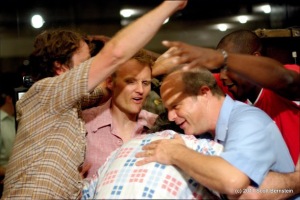 In August 2011 MMW played 4 Fridays as part of a residency celebrating their 20th year together – this week’s FAITU pick is the last Friday. (We have the first Friday streaming, but the 2nd Friday was never recorded and the 3rd Friday is actually lacking Medeski, and I haven’t posted that show here on TSP yet.) The guys and guests are basically set up in a circle of sorts, with the audience surrounding on all sides and from multiple levels in this area of the museum. 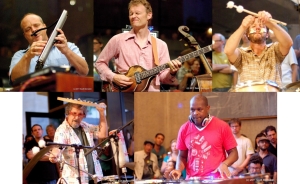 Billy & Logic get things started, after a brief explanation from Billy that the set’s going to start with some duo Turntable Sessions with everyone taking turns playing with Logic. illyB begins a soft snare shuffle of sorts, adds a bit of fill then Logic’s sounds start creeping in – this remains fairly abstract for the most part, little in the way of what we might call “groove”.

John & Logic continue the abstract explorations, with a seamless transition of Medeski swapping in for illyB. But at about the 2min mark of the Medeski/Logic Improv we get a sweet killer groove – I’m presuming the beat is coming from Logic in here since Billy is supposed to be gone (kinda hard to tell!). Space sounds emanating from both the keys and the turntables, but the accompanying groove feels good, if not perhaps a little familiar … reminds me of something Mago-ish, but not quite … eventually this drifts into open space … 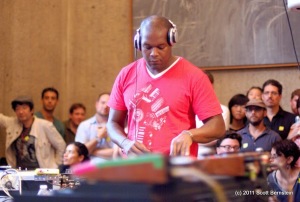 Chris & Logic begin after another seamless transition with Wood focusing on some wacky bowed action for the beginning of the interplay, with Logic responding in kind – this creates a perfect Halloween soundscape! Once Chris drops the bow though we get some great plucking work from him, with Logic once again following Wood’s lead by moving from the haunting sounds to dropping a beat. Chris moves to electric around 4min and this just plunks along real smooth-like. Chris digs deeper as the beat wears on – this is an incredible solo from him over Logic’s sounds! PHAT!

The session comes to a quick pause before Cyro Baptista jumps into the fray. Things begin like the sound of outdoor bugs, then Cyro starts whooping/chanting, Logic drops a beat, and things take on a very tribal-like feel. Logic plays with some vocal samples a bit too in reaction to Cyro’s vocals, there’s just some wild crazy sounds at times, all driven by this beat from Logic and the whoops/chants from Cyro. This peters out to silence … 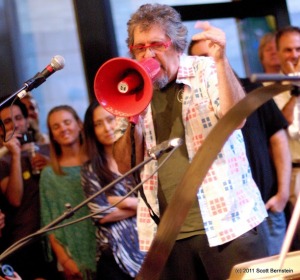 A twinkle of keys, bassline drops in with some cymbal work along with Cyro/Logic colouring, and BOOM! Sugar Craft, a Logic sit-in staple, is off and running – oooh yeah! Cyro’s hand drum work in that space at the top is PERFECT! The 5 of them work this old MMW classic up, around and over. There’s a wonderful mid-tune percussion/DJ breakdown, and when the head of the tune returns it feels so good. It’s a short version of the tune, which leads out in a trippy way – Cyro adds so much fun to the MMW flavour!

The Sugar dissolves into a murky organ-led Improv, lasting only a minute or two but with contributions from everyone on stage, creating some more Halloween soundscapes. This works as almost a bridge or lead into the next Improvisation, where Chris kicks in a groovy bassline and everyone jumps on to ride this for a few minutes before it falls apart into an Open Improv of sorts, driven mostly by the Drums/Percussion, but lasting only momentarily before we enter … 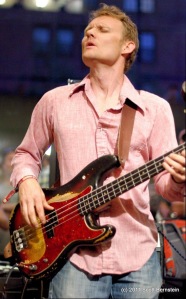 The Church Of Logic – oh, I REALLY dig this groove! This version sounds like a bit of a spazzed-out take, choppy, anxious and jittery. The ’98-’99 takes on this tune were considerably smoother … but this is a VERY rare tune for the band to pull out and a treat to hear. Their treatment of many older tunes during 2011 sounded a little odd, unfamiliar to the band, making for fresh or odd takes on some of these older tunes. So this is a bit of a frantic prayer session in the Church of Logic before we head into another hyper-version of an older tune, but with a twist …

Hey-Hee-Hi-Ho Improv pushes out away from the tune proper, just using it to frame the improvisation that drives and pulses forward into another Improvisation that almost uses what sounds like the Down The Tubes bassline from the MSMW Out Louder release, but not quite. Nevertheless, that bass gets this next section really moving before it mellows down a bit after a couple of minutes into something from a reggae dream … drifting off … 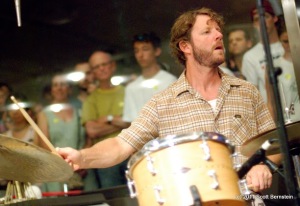 The organ Back & Forth begins, and this tune is like a circus event jammed into a few musical minutes – the song sounds carnival-esque. Billy jumps in on snare and a bass drum pulse under John’s organ; Cyro starts some wacky chanting with Logic adding some sounds; then Chris kicks in with that KILLER bassline for this tune, soloing over this mess of sound … a brief lull of sorts, Chris jams back in on top of it all – this is nasty! – and then another lull before the tune proper finally kicks in. I love this track, which showed up in ’06 and hung around for a bit until the Radiolarian tunes obliterated its set presence, but 2011 saw the band basically abandoning Radiolarians as they played mostly requests and improvisations throughout the year, which in turn coloured song selection at shows not following those “rules” they had on the spring and fall tours. There’s a pause when the tune finishes, and Billy talks about how they donated the tune to Patagonia to raise money for the environment. Not sure if you can still order the album or the track, but here’s a link with more info.

No Ke Ano Ahiahi is up next, and is nice and soothing after some of the hard groove and chaos we’ve heard thus far – this tune is ALWAYS welcome in a set, at least to my ears, and generally has excellent placement no matter where it’s found. It always feels right. 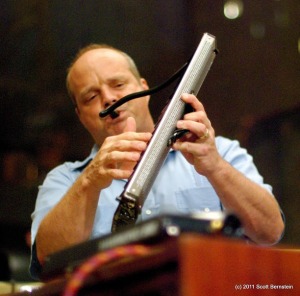 Partido Alto starts hopping, VERY playful opening – this tune is PERFECT for the 5 guys on stage to mess around with. Lots of space and they all are so familiar with the tune. Good, good fun.

Another small break and then, at the request of DJ Logic, they send us out with the groove to end all grooves: BUBBLEHOUSE! ‘Nuff said … a pleasantly groovy Friday Afternoon In The Universe at the Whitney Museum …