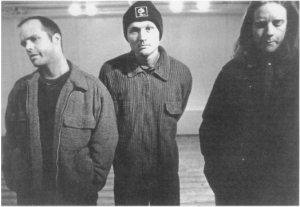 – SHACK THOUGHTS –
Very cool little set and the sound is fantastic. Opening with Henduck is a cool intro to this Austrian crowd, moving smoothly into Hermeto’s Daydream – sweet! The Jelly Belly > Drum Solo > Lifeblood is also especially nice to the ears …

SPRING 1997
And so we begin down the 1997 gig road. For me, I’ve been glad to have acquired what we do have of 1997 which seems to be a lowly circulated year. When I first listened to MMW in ’96 I had a number of tapes from 1995-1996 and then finally got to see the band in the Spring of 1998 for the first time — it was like seeing a different band in some respects. The key I’d been missing is having heard any 1997 material which to me seems like a huge transitional year for the band. They broke out a number of tunes in ’97 we never really saw much of not long afterwards (Disrobe, Fast Clicks) as well as the band having debuted many of the tunes that would end up on Combustication.

So enjoy these ’97 grooves folks and follow the evolution of, IMHO, the tightest improvisational group I’ve had the pleasure of hearing.