** FRIDAY, JANUARY 15, 1999 **
– Sounds begin slow and exploratory, seeking comforts of other sounds … illyB adding metal, John organ swirls, and then Chris comes in with a steady quiet plunk on the acoustic. The sounds separate and converge in various forms over the next few minutes, creating a beautiful soundscape of sorts … with that wacky MMW edge … with that harsher edge creeping a bit more a few minutes into this journey. Then the edge drops off a bit, things get a bit more open and chaos builds as John swirls on the piano, illyB is now on the kit and Chris is following right along, until we land in the sounds of Note Bleu, as noted clearly a favourite of the band’s being brand new, and opens interestingly into a Bass Solo — they kind of toy with how to surround this groove over the course of the run and later spring tour.

– A groove begins from nothing and they are ready to groove begins things solidify pretty quickly into a REALLY nice bouncing Improv. John working the clav and organ together, tweaking cool sounds among his melody, while Chris and Billy propel the beat along. John is really leading this here and the other guys are happy to follow his lead, adding their responses to his shifts. Then close to 5min or so the groove downshifts a bit to something more intimate and less celebratory. The 3 working as 1 — this is the MMW improvisations we all love, me thinks. VERY much a group mind at work, tension builds with a heavier vibe taking root and pushing out until it deflates to a metronomic lullaby feel, then an open feel, and the improvisation finishes up as a stand alone piece. 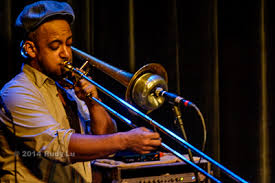 – Josh Roseman is invited to the stage after Billy’s welcome to night #3, and the players kick into Horace Silver’s classic Cape Verdean Blues

… and this is just great jazzy fun. A cool treat in the MMW repertoire as they’ve never played this much — just during HOT gigs! (Yes, this night could also be the *best* of the run … depending on what you’re listening for!)

– Roseman leaves the stage, the trio jives through the beautiful Brigas Nunca Mais, one of the regular tunes on this run, and then Chris Whitley hits the stage for a rockin’ Home Is Where You Get Across.

– Some Percussive sounds get the 2nd set going, moving into some Open Improv exploration, before we start hearing some piano tinkering and suddenly Buster Rides Again! Buster is always a hoppin’ tune, never disappoints. Check out the original by Bud Powell if you haven’t:

– The band rides Buster out into the slinky groove of Start/Stop — oh, the Stops! Oh, the Starts! DIG IT!

– Sounds emerge from the end of S/S, and once again Toy Dancing shakes its ass, with Josh Roseman’s trombone and Vernon Reid’s guitar blowing this version WIDE OPEN! This is a great tune for guests! 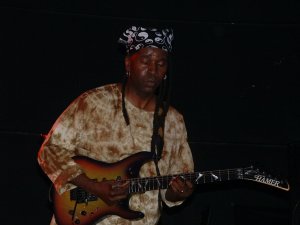 – Toy Dancing spills into the start of the subsequent Improv with Roseman and Reid remaining on stage. The slide into improvisation takes on a bit of an ambient open feel as the players search for where to go. The sounds remain pretty open until around 4min when a quirky groove emerges, seemingly with everyone morphing at the same time — good listeners on stage! This is a very weird thing that’s growing here, cool playful back and forth between the trombone and guitar, and eventually turns into something you can REALLY DANCE to — I just sat down, myself! Slows down into a walking bassline with Logic mixing against it, then the trombone takes lead as things wind down into yet another SMOKIN’ Psychedelic Sally, again Roseman and Reid adding super nice flavours.

– Roseman and Reid leave the stage, and trio + Logic strike into the beauty of No Ke Ano Ahiahi, which drifts into the always welcome Church of Logic groove! Danny Blume has hit the stage for Church and he is KILLING it! This moves into an Open Improv, before once again the gospelized Hey Joe takes us to the end of the evening …