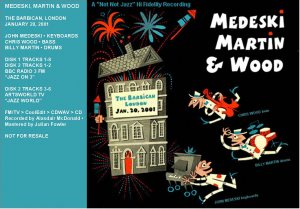 – SHACK THOUGHTS –
This 1/20/2001 show sounds FANTASTIC! And the music carries very much out of the Dec 2000 vibe … but things are even a little tighter it seems … although the playing in this set is rather loose at the same time: note the unfinished versions of 3rd Stone & We Are Rolling, and the oddly unfinished The Dropper, but then that wacky reprise! Some other choice tunes that just sound great in this recording — Hermeto’s Daydream for instance …

It seems this fileset is the entire show, but we don’t know for sure so I’ve still noted it as a PARTIAL SET … just in case … and I’m not going to bother seeding the other radio broadcast sources since, as I said, this one offers the most and what appears to be the entire set …