Scrambled at the last minute for this week’s FAITU pick — had a different idea that didn’t work out this week (stay tuned for next week!), but then stumbled back upon this gem from spring ’02, a tour known for its inclusion of the Uninvisible Horns led by Steven Bernstein (plays in Billy’s new-ish band Wicked Knee). However, this gig precedes the point where the horns join the tour (and the players differed a bit over the tour, with Bernstein being the only constant), but we’ve still got a couple of guests adding nice flavour to the gig. Brahim always fits nicely with the guys … I have a very neutral attitude towards DJs in general … none of them make me overly excited, and others work better than some … P Love fits fine for my tastes and there’s some fun interplay in the 2nd set with him, Brahim and illyB … 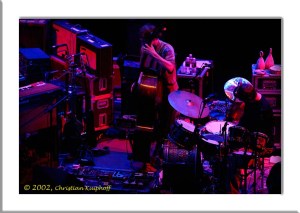 Show begins exploring the space with a nice beat from Billy and Brahim, P Love sprinkling sounds, and John and Chris making noise, albeit searching noise that settles in eventually with the 5 performers all locking into this spontaneous composition. A fine start to any evening, which moves ever so smoothly into the opening notes of Henduck. Henduck has cool percussion/DJ breakdown in the middle, with Billy kicking in on the kit at one point and we’re led back to the closing refrains of Henduck … and that pairs so well with the Lifeblood that follows — this opening Improv > Henduck > Lifeblood is exactly what you’re looking for. Check it.

The set closes in a less brooding atmosphere with the combo of Pappy Check > Partido Alto — again, so nice playful sounds from Brahim during the transition between tunes, and he fits perfectly on Partido! End set.

The set begins with the swirling gospel organ intro to I Wanna Ride You, and then the trip begins. Nice tight concise version of the tune gets us dancing, followed by the HEAVY groove of Uninvisible — oh, I dig that bass! — which is the beginning of a nice run taking us into another HEAVY groove in Big Time, and wrapping with the wackyness of Seven Deadlies which grows out of the usual open ending from Big Time, and that open ending has some fun sounds from Brahim.

After a brief pause we’re suddenly on Fire, MMW/Hendrix style! And where there’s fire there’s Smoke — seriously, at this time these tunes are virtually inseparable, switching their order on any given performance, but together like 99% of the time. I always liked that though, how we couldn’t have Smoke without Fire, or vice versa depending on the show. 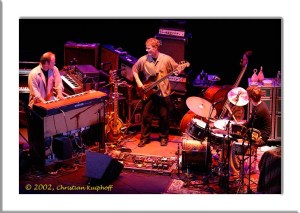 Out of the Smoke a super slinky Improv emerges, maintaining that Smoke-y vibe but a substance all its own which helps open up a VERY playful mood for the remainder of the set.

The run Ten Dollar High > Percussion Improv > Percussion/DJ/Bass > Bass Solo > Shacklyn Knights > Percussion’n’DJ > Moti Mo is, once again, exactly what you’re looking for — you better download or listen to this gig! Seriously, this closing of the show involves so many wonderful moments between all 5, or just a couple players at a time, to just some solo moments. Moti Mo is the perfect closer, bringing us back to the methodic grooves that opened the show.

Then some Wiggly’s Way leaves a smile on your face … at least it does on mine.