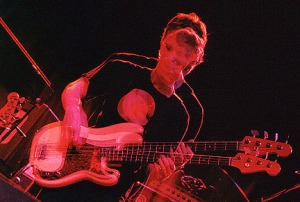 – SHACK THOUGHTS –
After a few days break, and Chris jamming with some other folks at Jazz Fest (a gig with Stanton Moore, and another gig with Johnny Vidocavich; on a side note, Chris’ playing on Moore’s album(s) is great stuff, and you can download the aforementioned gig via the LMA: http://www.archive.org/details/moore02-05-02.shnf ), and then the band played this gig at the Saenger.

1st set finds some nice song selection, like Syeeda’s, Seven Deadlies and HHHH, and then Set II begins with a fun acoustic intro into I Wanna Ride You and the tunes with Corey Harris are well worth checking out — I’m gonna listen to them again right now! HA!

The segment of tunes after Harris leaves the stage though, is positively KILLER! This run of tunes: Uninvisible > Wiggly’s Way > Bass Solo > Shacklyn Knights > Night Marchers > Toy Dancing = LOVE IT!

Again, the encore file is placed with D1, but my ID3 tags sort it at the end of Set II as track 12 of the set.