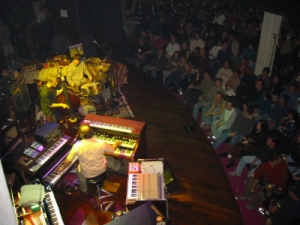 Oh, hot summer Montreal … it’s a sticky town when it heats up, and we were staying in one of the McGill dorms which just seemed extra hot, with no air flow. But, the price was right at the time our little family made the trek west to the province of Québec into the fun city that is Montreal. 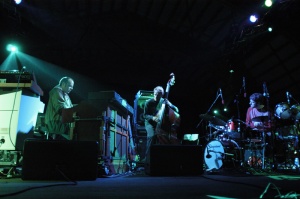 This was our 2nd time to the Montreal Jazz Fest, but first time since the late ‘90s and finally corresponding with MMW playing – I was excited, to say the least. My wife and I took our (at the time 8-year-old) daughter to the festival for her first time, and the experience of Montreal. If you’ve never been to the Montreal Jazz Fest, do yourself a favour and check it out. Lots and lots of fantastic music from around the world, and a wide palette to sample, and good for all tastes and ages. But it can make for a long day when you’re only 8 years old. The Kid was a super trooper, and wanted to enjoy the show – she drifted off briefly, and thankfully we had a stool for her to sit on and a counter for leaning. The Metropolis is a fantastic concert hall, with a general admission floor and then a balcony with curved rows of long tables/counters and accompanying stools. We were down near the front and had a perfect view. Didn’t see any microphones at the time, so I was doubtful of getting a recording of the gig – happy to have tracked this down shortly after the show! Because it was an incredible evening of music, and merger of sounds, so it’s freakin’ fabulous it’s been captured for us to hear today. BIG THANKS to the taper! Onto the show …

We got in some time after 9pm, I think, with the opening act starting around 10pm and playing an hour or so. I remember one of the bouncers telling our daughter to make sure we, my wife and I, behaved ourselves – he was counting on her to keep us line, he said. She found it funny, and so did we because she always kept us in line – we’ve always been the kids in this relationship, it seems …

Finally, it was MMW show time …

The band entered banging woodblocks – something I saw them do to start the 2nd set of my 2nd MMW show back in ’98 – so it’s a percussive start to the evening, with DJ P Love casting out some atmospheric filler during this opening Open Improvisation. Eventually P Love leaves the stage and Down On Me begins to burble up from the sounds into this full-on acoustic romp – love it! This was my first time hearing the song at a show, and it was new only that spring of ’03. We had a number of shows circulate speedily from the spring tour through this “new thang” called bittorrent (yep, blew my mind at the time! – still does to some extent), so the song sounded familiar to me but I didn’t really know it, and we never got a title for it until later in ’03, I think, maybe even later. Anyway, this tune is a wonderful excuse for John to tickle the ivories into submission, so I welcome it any time. (The Down On Me melody, as I’ve noted in other show notes, had been kicking around MMW’s musical consciousness for some time, but finally solidified into a full song in the spring of ’03.) 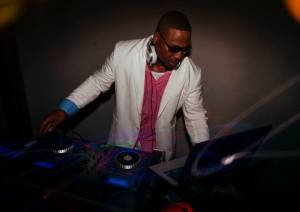 As Down On Me fizzles out, Henduck rears its head out of the ether and was very welcome to my Shack-man era ears. Still just the trio on stage and they really milked this tune in all the right ways: a nice slow move into it out of Down On Me; then a slow build over Billy’s shaking with John’s organ vamp and Chris’ slow pulse; and then shit opens up and it gets real. Damn. By this point these cats can make Henduck dance in all the ways they want, with Medeski employing one of his ’03 key sounds (what is that? sounds almost warbly-woodwind-like? Is that the Wurlitzer?), and that sound tweaks Henduck ever so nicely.

Next up Nocturnal Transmission was nice to hear – I had to skip over seeing the band during the Uninvisible era (life, school, etc.), so I was real happy to be catching this tune. P Love comes back out and so does Russell Gunn on trumpet (also playing at the festival). Splashes of sounds throughout the opening of the tune with everyone contributing to create this bed of sound, and when the 2nd section of the song kicks in, where the tempo picks up like double-time (often tracked as a separate song on live shows) everyone is laying it all out. Gunn is utilizing some effects on his horn to muffle the sound considerably – I was indifferent to this at the gig, but it in retrospect it fits the vibe of the tune; I was merely hoping to hear the guy play in a clean trumpet sound and it never happened, not even during the set of his that we caught … seemed odd to me to always use some kind of effect. Anyway, it works here perfectly really, and Medeski is back to that ’03 warbly sound again, and eventually this entire monster groove wraps with a brief groovy solo from John.

Billy introduces the guests then delivers a brief percussion improvisation before slamming the kit, everyone joining at that moment, and some wild sounds begin to emerge, wiggling and familiar, but always just crawling around the eventual melody that will give way. P Love plays a sample where a woman says “let’s get to know the instruments one by one”, and then anything but your usual display of solo prowess ensues – the wild sounds just get wilder. It’s playful and open, but eventually Worms gives way and the ensemble on stage is relentless in its Worms exploration. 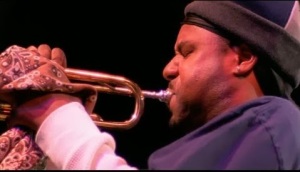 A Drum Solo wiggles out of Worms and Billy kicks it for a while by himself, but near the end of the solo track Foday Musa Suso comes out on a junkuran (hand drum) to join illyB, which develops into the introduction to Toy Dancing and Suso is finding pockets to fill in that intro, and then again during the tune proper – this guy is REALLY listening, and this tune is just the tip of the iceberg. Again, glad to hear this tune as I would be happy with a Toy Dancing at any and every show – I really dig that groove, the sound of the drum at the start, the dysfunctional way all the parts join together to create the overall sound. Damn. I hadn’t heard it since the first run of MMW shows my wife and I hit back in ’98, when it was so new that those performances were more like improvisations around the song’s theme than they were the song itself, which took shape just a night after our 2nd and last show of that spring ’98 tour. Gunn, who returned for this tune, is also laying a line over and weaving with Medeski that works really well here, again, the effects on his trumpet melding nicely into MMW’s vibe.

A brief pause as Billy introduces us to Foday Musa Suso, Gunn leaves the stage, Suso picks up his kora, Medeski swirls an organ intro, and I Wanna Ride You takes us on quite a ride. It takes a little over a minute before you can start to really pick Suso out in the mix, but then listen to the holes he fills and they give him a cool breakdown moment – the kora sounds amazing in here! Wonderful interaction with him and the band, a true quartet at work.

Another pause as Suso grabs his “violin” – this isn’t your standard western violin, but something in that family of sound but I believe comes from Suso’s culture. The “violin” has a creepy thin sound, dissonant, that weaves and cuts through the Smoke groove, once again finding gaps in the music for his input and infusing the band with new blood.

Next up, the set closes with the HEAVY bass-driven Uninvisible, which I was again happy to hear since I didn’t catch any of that album’s touring, along with the other tracks from that album we caught on this night, and having the guests contribute to a number of those songs made them a little more special to hear on this night. Suso is back on the kora for the Uninvisible closer, again finding pockets, but P Love and Gunn are back on stage helping lay the bed of sound – everyone is playing together so well here, truly an ensemble unit. This version is THICK. 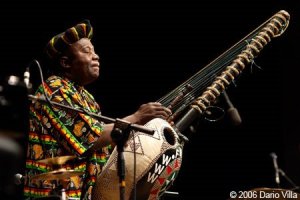 Only P Love returns to the stage with MMW for the encore of one last Pappy Check, which sends us into the late night Montreal air just buzzing with groove …

We nudged our daughter awake by this point – she was in/out over the end of the show, which started at like 10pm with an opening act (not worth discussing – seriously, except to say what a waste of time! Sorry guys, that’s harsh, but opening for MMW was not the place for this group of players), so it was close to 1am when we got out of there (which was 2am by our internal clocks), but the Kid was jazzed up now after some rest so we wandered into the free late night sets to give her the full festival experience … and you can get a taste of that listening through on this fine Friday Afternoon In The Universe …