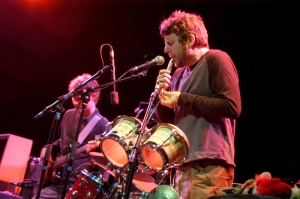 – SHACK THOUGHTS –
Standing out as one of the most incredible run of shows MMW has ever played, these April 2004 gigs of 100% improvisation exhibit the band at the height of their SHACK skills, pulling endless melodies and grooves out of thin air, along with the usual visits to more out-there/open space.

Each night encores with a tune intended for release on End Of the World Party (Just In Case) later in 2004 — Whiney Bitches never made it to the US release, but I think was on the Japanese release, and was later found on the Note Bleu-Best of the Blue Note Years 1998-2005 compilation disc.

All that to say: Dig into these gigs of pure musical exploration … you won’t be disappointed.