Does anyone else remember how strangely awesome it was to start getting access to shows the day after or shortly after a gig? From 2003-2005 I remember this becoming more common place, certainly some bands are covered more by tapers, but those capturing MMW’s grooves in certain regions became quick to share too — as always, we owe HUGE THANKS TO ANY/ALL TAPERS!!! LOVE YOU GUYS! And so I remember this fall ’05 tour, the last really big tour MMW have played, really, as us getting to hear shows pretty quickly. This particular source didn’t come out at that time, but this is a better capture of the evening thanks to JAZ and Steve!

2005 retained much of the ’04 improvisational spirit, taking us even further at times. LOTS of Improv to soak up from ’05 too and this week’s show gives us a nice taste of that in the 1st set. 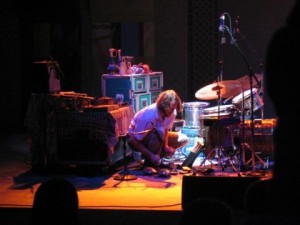 The opening 3min or so find the band in an Open Improv exploring the sound space of the room, searching for a groove which begins to build just around half past 3min, but really kicks in when John introduces some crazy melodies around the 5min mark — he has a wild sounding keyboard arsenal at this time — where do these melodies come from?? How can he and Chris have this endless source to tap into? In a radio interview a few days before this gig John talks a bit about that seemingly endless supply of grooves they seem to have access to, shrugging off he how he doesn’t know where it comes from but they’ve been given this gift so they explore it. Anyway, back to the gig … as this improvisation develops it’s become a full fledged spontaneous composition by the time the first track hits 10min, just building on the open base they started with and creating a purposeful improvisation. Listening to MMW is kind of a religious experience for me when they’re really open and out there, and this gig has that vibe, especially this opening … which climaxes and then disolves into more open space — I find these sections tickle me sometimes, making me giggle or chuckle out loud, like the opening, but this one is a little more methodic as John comes in with the piano leading us into Ray Charles’ What’d I Say, a fun romping blues tune. Love hearing Medeski rock the piano! He’s spoiled me for listening to other players … the blues take us into some Drums’n’Bass and eventual Drums-only action where Billy makes his way to a hand drum to work the transition into Toy Dancing — I love this move! Billy often finds his way to the hand drum to start the “bloops” that signal the Toy Dancing beat, John sounds out that siren-ish call and we’re dancing with toys …

Post-Toy Improv moves into a thumping tribal-ish plomp … Medeski playing this pretty-but-edges-broken melody on the Rhodes, and jabbing with (what I think is??) the Wurlitzer — maybe it’s the Clavinet? Anyway, that builds to John moving to the Organ as the tribal beat grows intensity with Billy just going crazy by the time the last track of Set I peaks over the 12min point — YEAH!!! Then things get really quiet until, BOOM around 15min! This maniacal “groove” erupts — and is this like an early raw version of Miles Behind?? … the band was debuting some tunes this fall that would end up on the Out Louder release with Sco in ’06 — just in time to take us to set’s end where it just seems to bubble over, like it can’t be contained … set break. 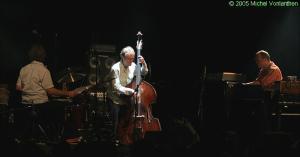 Shackman kicks off the 2nd set, and this was a brand new tune having debuted earlier in the week during the radio spot mentioned above. It didn’t have a title at the time, was dubbed a few different temp names before Billy called it “After the Onsen” during the Dec ’05 Japan run. Then the track was released in 2011 as part of the 20 singles the band produced, and the title on the track’s release was Shackman. 15 years after the album Shackman, we have a song titled Shackman. Makes sense … this tune just dies down at the end and …

Sugar Craft’s call echoes out and the groove kicks in. I dig this tune without Logic because I like what John fills in for some of the sounds … the energy on this version is nice and full with Billy just giving it — pretty heavy!

Shine It’s bass kicks in as the Sugar melts — kind of abruptly, but we’re off in the happy Shiney groove now — John’s on piano! Tune doesn’t differ a whole lot each time, but this is a tight performance. They’re playing the song a lot at this time, so no wonder … playful throughout.

Sasa is always cool, although no other performance has hit the heights the 2/28/04 version w/Ribot hit — transcendent around 6min in on that one! But, this one, as usual, bites nicely into the groove.

The move from Sasa > End Of The World Party is crunchy in a good way! Listen to those sounds morph out of the Sasa groove into the haunting opening of EOTWP — love this shit! If this is the end of the world, these are the tunes for me.

We get some playful tinkering and jabs from Billy and John as Chris really sets up to take us into the main melody of: NOCTURNE! I REALLY LOVE THIS TUNE! And I most especially dug it’s resurgence around the 2005-2007 time period, and this gig is actually the first performance of the song since ’99. Not that it wasn’t great when it debuted in ’98, but John has some new sounds by this time, Chris’ tone is a wee different and I think Billy’s toolkit is expanded as well. Anyway, I can bop my head to this groove for hours — sometimes I’ll just put on a playlist of a bunch Nocturne performances and listen through … love when Billy finally gets to the kit and kicks in a beat as John fills in his end a bit more, all while Chris keeps plucking that beautifully agonized bassline …

Following the drift out of Nocturne with the pumpin’ pluckin’ of Who the Fuck? is a SUPER SWEET pairing. This PJ Harvey tune had been around for almost a year by this point, played at probably over half the band’s shows since that time (if not more!), I remember hearing folks wanting more variety in the setlists, but where the fuck is Who the Fuck? now? Huh?! Enjoy these tunes while they’re in rotation, I say! MMW have often made large shifts in their repertoire and seemingly milked certain tunes for concentrated periods of time, but then those songs can suddenly disappear from rotation and that’s that. This tune simply rocks. HARD. I dig it.

The set wraps up with a common closer for this era, Bass Solo > Queen Bee — love this slinky groove! My wife and I love dancing to this tune, and it reminds me of her groove — I like it! Think I’ll put the tune on when we get home and crack a couple beers …

The evening’s encore is Olde Wyne — love that old school spelling! I always knew the song was a cover, but just looked it up and discovered the original artist to be Afo Executives & Tammy Lynn – who knew? This is not an unusual spot to find some Olde Wyne, and it sooths us nicely as the gig winds to a close.

And that’s another groovy Friday Afternoon In the Universe …