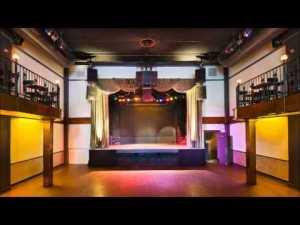 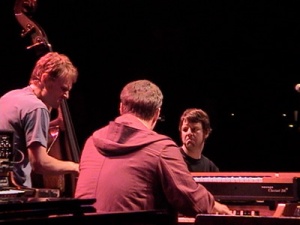 ** SUNDAY, JANUARY 17, 1999 **
– Another performance of Psychedelic Sally begins this 5th and final night at the Bowery, featuring Mr. Marc Ribot on guitar — need I say more. DIG IT!

– A GROOVIN’ Improv is up next with Ribot once again adding that Ribot-esque touch — LOVE IT! Seems like a basic bluesy jam, but super fun to hear these 4 cats get down. Cool interplay over the jam and some nice patience over the last couple minutes as it winds down. 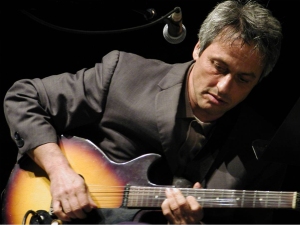 – Then the band invites up Steve Cannon for a wicked fun full version of Whatever Happened To Gus — love the spoken word! Cannon is clearly having a ball, as are the guys themselves.

– The trio then invites up Doug Yates on bass clarinet and start off into some Open Improv, giving Doug some room to explore before they hit into the Seven Deadlies (Bridge), and Doug’s deep sounds add a very cool vibe. 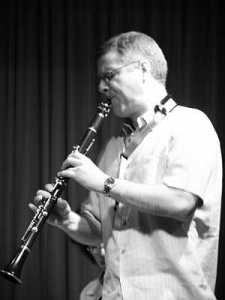 – Another run through the new-at-the-time Note Bleu finds the trio jiving with the tune’s groove more and more, followed by another fun Oren Bloedow tune with Have Mercy NJ, and then one of the run’s popular tunes, Brigas Nunca Mais, finishes out the set with Logic joining for the groove.

– The gig’s 2nd set, the final of the run, may well be the best — who can say for sure?! I’ve said that about much of this run because it is ALL SO GOOD! This last set isn’t the most fluid, as there are plenty of pauses as the guests switch up throughout, but when the ensembles are playing they are creating OUTSTANDING sounds. The opening Percussion/Violin Improv with Eyvind Kang on violin, and Logic on stage as well, is a percussive journey moving nicely into the more full Improv to follow, Kang still on stage, but this is still very loose and gets even looser as it moves into even more Open space.

– The trio takes a moment to treat our ears to the sounds of Sand, so beautiful, then just the three of them groove out to Scrontch Meister one more time on this run, allowing Billy a Drum Solo mid-tune, which is a really fun tune that only stays in the repertoire briefly, unfortunately. 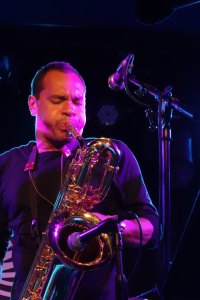 – The rest of this set is tops! Jay Rodriguez, back again with his sax on this night, and John Dirac on guitar hit the stage and BLOW UP Toy Dancing! Seriously, check out these cats! Dirac has a sweet tone and is nice to hear … but he and Rodriguez leave the stage, and Eric Hipp enters on tenor sax for a take on the wild Sun Ra composition, Love In Outer Space — check out Sun Ra’s version for some fun comparison — so many players, so thick and layered:

– Hipp remains on stage for the first portion of this show/run closing sequence of Angel Race (I’ll Wait for You) > Open Improv > Hey Joe, joined by Marc Ribot, but Hipp leaves for the final number leaving just Ribot with Logic and MMW. Wow. Both Hipp and Ribot are on fire in Angel Race, another crazy and incredible Sun Ra tune — first known performance, I believe. I had the pleasure of catching an Angel Race in May of ’99 and loved it, before it gets mashed up in the medley with Nostalgia For Times Square, which is cool too … but hearing MMW bust this open with the guests on stage is really nice, and of course leads to some more Open Improv, carrying us over to the final gospelized closing of Hey Joe, with Ribot laying it out in fine fashion intermixing so well as he does with MMW …